Senior officials say delay in appointing new central bank governor causing great damage to exports, production and real estate. ‘The world is beginning to look at us with a jaundiced eye,’ one of them says

The Israeli economy is in a state of bewilderment following Prof. Leo Leiderman’s decision to opt out of serving as Bank of Israel governor, which came shortly after Prof. Jacob Frenkel dropped his own candidacy. Liederman’s withdrawal only increased what top economists are referring to as “chaos.”

Senior officials said Saturday that the absence of a permanent governor leading Israel’s central bank was already causing great damage in the fields of exports, production and the real estate market.

“The (Bank of Israel’s) Monetary Committee must delve deeply into the matter and make decisions immediately, because the damage is already heavy,” said Yacov Sheinin, CEO of the Economics Models research and consulting firm.

A central bank is a country’s most important economic institution. It can affect not only the interest rate level and cost of mortgages, but also the local currency’s exchange rate against other currencies and occurrences in the fields of exports and production, the unemployment level, and everything taking place in the capital market.

Heads of Israel’s banks and investments houses – as well as stock exchange, foreign currency and real estate traders – are closely following the situation in the Bank of Israel with a great amount of interest, but with a lot of concern as well.

“An economy operating without a permanent governor is an economy subject to shocks. The public is looking for stability and wants to know who the governor is and what his policy is. It’s the opposite of the current situation. Even the world is beginning to look at us with a jaundiced eye,” a senior economic official said Saturday. 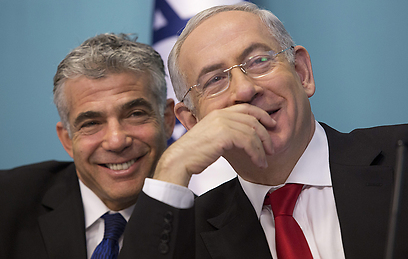 Lapid and Netanyahu. ‘They should really make sure that we have a governor soon’ (Photo: EPA)

“It’s a terrible situation that the Bank of Israel is simply paralyzed, looking at what is happening in the economy from the side and not doing anything,” Sheinin said. “The Monetary Committee was established precisely in order to tackle such situations. There is no reason in the world for the Monetary Committee not to take matters into its own hands, in wake of the current situation, to immediately reduce the interest rate and initiate actions to prevent deterioration in the economy’s main industries.

“Unfortunately, this committee is under a lot of pressure now because of the strange situation created. I simply fail to understand it. Are they looking for their nursery teacher? Waiting for a permanent governor? We have a monetary committee which must act immediately, without further delay. Who exactly are they waiting for?”

Sheinin added that former Governor Stanley Fischer understood that cutting the interest rate inflames the real estate bubble, and so at the same time he restricted mortgage loans. “The interest rate must be reduced again and conditions must be toughened, so that any person who is not a young couple buying its first apartments will find it more difficult to take a mortgage.”

According to Sheinin, “When the Bank of Israel is paralyzed, the damages to the economy are very serious. There are no investments in the economy. There is a slowdown. Exports drop. Production drops. Unemployment rises. The Bank of Israel must be active in the current framework as well rather than panic.

“Mrs. Karnit Flug must act as governor now. If she is really in the league of a bank governor – she must act urgently. It’s urgent for the economy. Even if the nursery teacher is being held up, the Bank of Israel can and must act. There is a monetary committee and there is continuity. The head of the committee is the acting governor and she should act accordingly.”

Sources in the Finance Ministry shared the opinion that the damage was accumulating. “I don’t want to blame the prime minister and finance minister for the fact that there is no governor at the moment, but they should really make sure that we have a governor soon. The current situation is certainly causing damage to the economy, and they are aware of that,” said a Treasury source.

Officials in Israel’s Manufacturers Association and Chamber of Commerce are convinced that the appointment of a new governor within days will lead to steps which will prevent accumulated damage to the economy.

The two organizations are calling for a further reduction of the interest rate in order to urgently assist exporters, due to the US dollar’s very low exchange rate, and in order to help small businesses and the consumer public to take loans at a cheap lending rate and pay little interest on their overdrafts – otherwise, according to one of the officials, “we may enter a recession.”

At the moment, due to the absence of a permanent governor, there is no change in terms of buying dollars in the foreign currency market. The dollar’s exchange rate is very low, and Fischer used to combat this situation with sudden purchases of large amounts of dollars, which immediately pushed the dollar rate up.

Currently, the Bank of Israel is continuing its policy of purchasing $2 billion a year, or less than $200 million a month, which is not enough to affect the exchange rate. As a result, the Israeli shekel’s appreciation continues.

One of the main problems in the Bank of Israel at the moment is that the Monetary Committee includes only four members instead of six, following the departure of Fischer and one of his advisors. Three of the current members are representatives of the public, and the fourth is Deputy Governor Dr. Karnit Flug on behalf of the Bank of Israel.

The new governor will have to appoint two more committee members – the new deputy governor (following Flug’s plan to resign from the bank) and another senior Bank of Israel official.

The major effect of the public’s knowledge of the next governor’s identity could be seen in the behavior of the stock exchange and foreign currency market the day after the Liederman’s appointment was announced. The bourse edged up (also due to global rate increases) and the shekel grew stronger, in light of Liederman’s statements that the interest rate was too low, which implied that he planned to increase the rate in the future and strengthen the shekel as a result.

The uncertainty over the identity of the next governor and the Bank of Israel’s future policy on all areas is leading to instability in the markets.